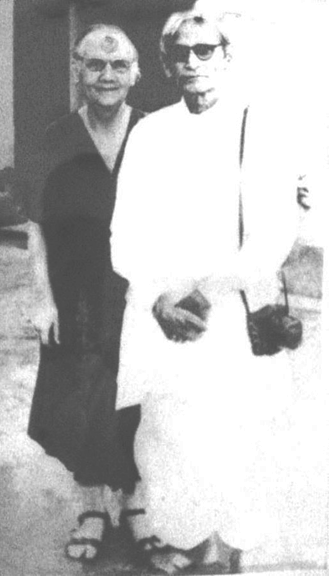 Our school was established on 7th September, 1937 by Mrs. Ellen and Dr. V.N.Sharma, with a small group of 7 children. Inspired by new methods of education being debated in the west, they wished to create a school that could encompass the best of eastern and western educational philosophies. Beginning in a small way, they brought about new ideas and methods of education stressing on the holistic development of each child. By 1938 a School Advisory committee was formed.  By 1945 the strength of the school rose to 260 children and 18 teachers, and a middle school was set up. The school continued to grow through these years, moving from a small house to its present location.

The school was inaugurated by Sri Swami Saswatanandaji Maharaj, the president of the Ramakrishna Mission. The name chosen was inspired from Froebels Kindergarten; the ‘Children’s Garden School’- A garden of learning, where children could learn through play, without fear and with freedom to express themselves and to awaken their innate talents. The symbol of a banyan tree (an ancient Indian symbol of wisdom and shelter) with children swinging from its roots was chosen as the logo. A special three-day exhibition of educational toys and materials organized for this occasion was opened to the public.

A Garden of Children

Vision of our Founders

In addition to education, the Sharma’s paid special attention to the health and well-being of children, introducing food and health-supplements, medical care and integrating challenged children. They soon added hostels and paid attention to the physical and psychological needs of each child. The school and classroom ambience, “play-way” methods of teaching and a combination of the philosophies of Pestalozzi, Montessori, Froebel and Petersen were adapted to Indian conditions and contexts, slowly evolving into new and innovative methods of teaching.

From this point onwards, the founders and the school were as one entity, always striving selflessly towards achieving the welfare of many. In the words of the Sharmas, the Children’s Garden School, was to be a Garden of Learning, where, “…the older ones, the teachers are the careful gardeners of the delicate plants; the little ones. Thus the school had endeavored since its inception, to encourage children to move freely with the teachers, freely like the members of a FAMILY” (CGS Annual Report 1938). Within the context of small classes, the experimental methods begun by them were a great success, and the ‘little ones expressed themselves naturally and without shyness or self-consciousness or fear’ (CGS Annual Report 1938).

Years later, on the occasion of the Silver Jubilee, the Sharmas wrote: “When the school was founded, 25 years ago with three children, the main idea was not to establish what one usually calls a school, but a place where the little children below five years and perhaps upto seven years could develop according to their own speed and capacity. At that stage writing should not be forced on minds and hands not prepared for it, but could be prepared by lots of joyful occupations like drawing or painting on big light boards and large sheets of paper, or by clay-modeling and bead threading which makes the fingers skilful and sharpens the eye. Picture books, stories and matching games may lead one day to reading games introduce numbers-in short, we planned originally a KINDERGARTEN-and not a preparatory school”. (CGHS Souvenir 1963).

Many years later they could laugh at their blissful ignorance of the huge task ahead of them. “Trusting that ours was a much needed work we started the school without any financial help and never imagined the Himalayan Task that we had unwittingly undertaken. Thank God we did not know what financial difficulties were awaiting us, perhaps we would not have mustered the courage to go ahead and admit more and more children, engage more and more teachers, taking finally this big house, to build up higher classes till we had not only a kindergarten, an elementary section, a Middle School and a Kindergarten Teacher’s Seminar, today a strength of 1050 children, 40 trainees, 60 staff members, still living from hand to mouth-with an ever increasing deficit.”

The logo, the banyan tree, the symbol of wisdom and shelter, gives protection to the poor and the destitute irrespective of caste, creed, religion and status.